The ability of helium in its liquid state to seemingly disobey the laws of physics has been the subject of study for almost a century; what occurs is a spontaneous process in which liquid helium rises up and out of its container. Yet this phenomenon is not commonly taught in schools, or even universities for that matter.  In this post, we will attempt to explain the science behind this phenomenon in the simplest terms possible. Knowledge awaits.

Helium-4 – the most common isotope of helium – has a boiling point of just 4.2K under standard atmospheric pressure; its liquid phase has been studied extensively over the years. The low temperatures required for helium to transition from a gas to a liquid can be attributed to its weak interatomic forces due to it being a noble gas. Furthermore, its low atomic mass means that helium atoms tend to stay apart from each other as this decreases its ground state energy, a naturally occurring quantum phenomenon1. 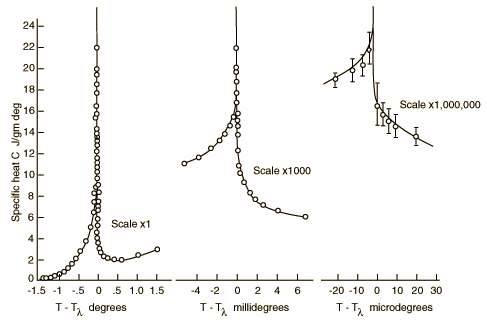 Fig. 1| Specific heat data of helium-4 showing the ? point, named as such due to the shape of the gradient2. As the temperature drops past the ? point, a discontinuity occurs in the heat capacity due to a fraction of liquid exhibiting Bose-Einstein behavior and producing a large circulation of particles. As the temperature drops, more particles in the degenerate ground state means less entropic difference and hence heat conductivity is lowered3.

At temperatures just under its boiling point, liquid helium behaves as a normal liquid – exhibiting properties such as possessing viscosity, filling its container and having limited heat conduction. In order for liquid helium to diverge from the rules of classical quantum mechanics, such as spontaneously rising up the sides and out of its containers, it has to be further cooled past a critical point known as its lambda (?) point (Fig. 1). In order to achieve this, liquid helium is cooled using a vacuum pump which reduces the pressure in the container and causes evaporation and heat loss so that temperatures under the ? point can be attained. It is at and below this point that helium can be described in its superfluid form, helium II.

The ? point of helium-4 is around 2.2K4, below which it begins to exhibit such behaviors which were found to be closely linked to that of an ideal Bose-Einstein gas3. However, due to the fact that this phenomenon was originally applied to gases whereas helium-4 is in its liquid phase, some of these statistics had to be altered to accommodate the presence of intermolecular forces. Thus a model would need to be constructed in which helium II could be described under the conditions of an ideal Bose-Einstein gas; a fraction of particles distributed overexcited states that was determined by temperature, and with another fraction ‘condensed’ at the lowest energy level5.

This led to the two-fluid model of helium II being described3, with atoms not strictly belonging in either ground or excited state but rather possessing two kinds of flow4. In a rotating vessel, only the ‘normal’ phase is carried along while the ‘superfluid’ phase is stationary. However, this mixture cannot actually be divided and is simply used to describe the phenomena of atoms possessing two simultaneously possible quantum motions6.

The behavior of helium II as a result of possessing a high heat capacity (Fig. 1) near the lambda point can now be investigated. It is assumed that a cooperative process is involved in the heat conduction of helium II; that is, at the ? point almost all of its thermal energy is present as an energy of disorder7. Hence the flow of heat within the liquid helium ‘lattice’8 is described as a flow of disorder rather than the flow of vibrational energy in a classical solid.

The ability to rise up the sides of its container is limited to the superfluid phase of helium II. A ‘film’ forms on surfaces that helium II is in contact with – named a Rollin film9 – and moves out of the sides of its container, always collecting on the lowest level possible. This is due to a large heat transfer between the ‘hot’ normal fraction and ‘cold’ superfluid fraction, however, superfluid helium does not carry ‘heat’ in that sense. As it lacks other sources of energy dissipation, the motions of it are thermodynamically reversible and this is evidenced by the temperature of helium flowing out of its container being lower than the helium inside the container10. This system was investigated and each fraction was shown to possess different velocities as they flowed, known as the first and second ‘sound’ of helium II6.

Fig. 2| Graph showing the level of helium II in an open container over time11. Apart from an increased rate of transfer in the first 5 minutes, the rate of movement follows a linear function.

It was discovered that the rate of helium flowing out of its container followed a linear gradient (Fig. 2), which meant that the levels of helium inside and outside of the container had no effect on the velocity of transfer11. It was also found that the direction of flow of the liquid is always opposite to the flow of heat i.e. a transfer of energy is involved12; this further established that the mechanism of this ‘transfer effect’ was not related to a simple siphon.

By applying the Bose-Einstein condensation to this process, the superfluid fraction of helium II can move without facing any resistance and therefore its transport out of the beaker would require a corresponding flow of heat5. This theory applies to the experimental data gathered (Fig 2); as the container is removed from the bath there is a sharp increase in temperature and this is reflected by a high initial rate of transfer. As higher temperatures mean a smaller fraction of helium is superfluid, this slows down the overall transfer. However heat is also lost through evaporation and conduction which means an equilibrium is established between the normal and superfluid fractions of helium over time11, hence the linear rate of transfer out of the container.

tl;dr: As a container of liquid helium is cooled past its ? point, a fraction of its particles ‘condense’ and exist in their lowest energy state. This superfluid phase possesses an extremely high heat capacity and conductivity due to its unique mechanism of heat transfer as a flow of entropy. This was shown to form a film that creeps out of the sides of a container owing to a thermodynamically reversible process – the rate of which is dependent on temperature and hence in an undisturbed system, this flow equilibrates as a linear function against time.

This is an original piece of literature that I’ve decided to showcase. Admittedly I am no expert in the area of physical chemistry – but it just goes to show that the opportunity for learning is available to all, regardless of expertise and qualifications. Also, how awesome is liquid helium?