The Faults in Our Wines 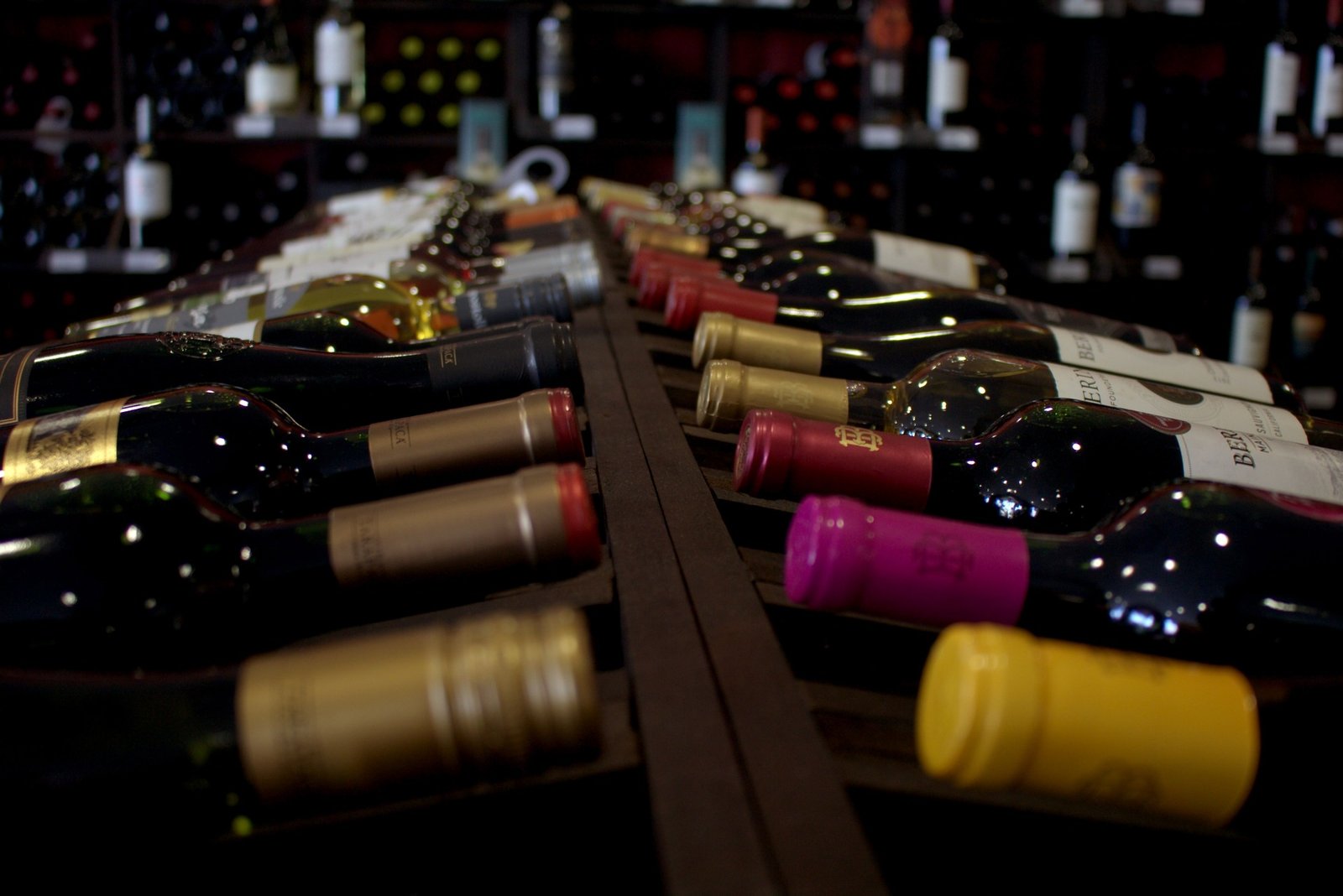 To all you wine lovers out there, have you ever wondered how many chemicals are involved in conjuring the unique taste of a wine – grapes from a certain vineyard, harvested during a particular year, aged in a carefully selected barrel. These are just some of the factors that contribute to the thousands (yes, thousands) of chemicals that affect a wine’s taste. But what if somewhere during the process of winemaking, something doesn’t go quite right…

To be fair, the sheer number of compounds in wine that are able to activate your taste receptors is immense. And throughout the process of wine-making, one tiny change anywhere along the line can alter the products significantly enough for one to discern – and not necessarily in a good way. 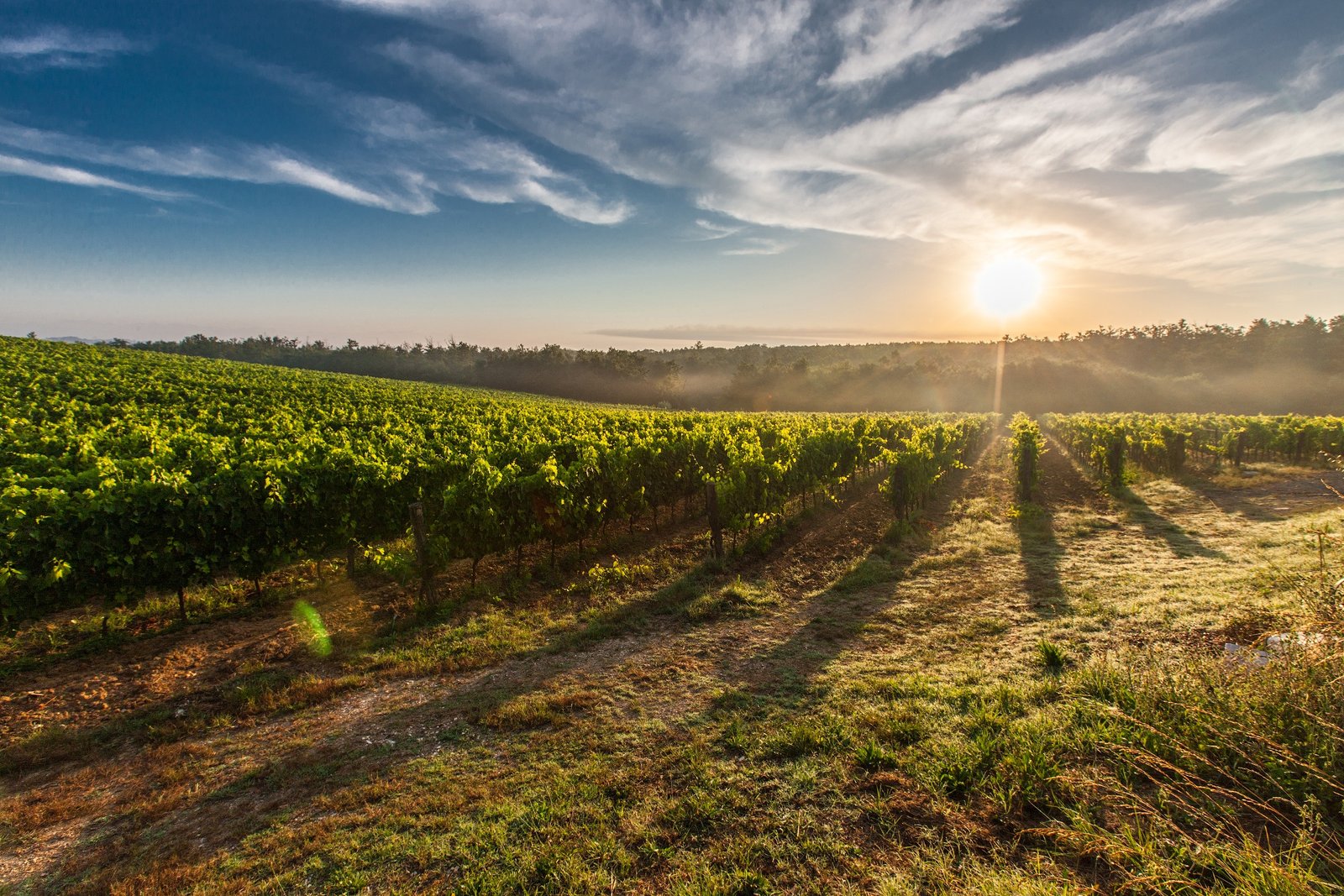 Ah, in a perfect world…

If you think it is remarkable that wine (under the right conditions) can be stored relatively unchanged in a bottle for many years, you can thank the additives that are added before, during and after the fermentation process. These include sulfur derivatives to prevent oxidation as well as an antimicrobial agent – sulfur dioxide is the most common of the lot, with the gas dissolving in wine and producing sulfite ions:

The sulfite ion binds to precursors involved in oxidative reactions preventing them from reacting with oxygen. When it is added above a certain threshold however, it can give a perception in the wine of matchsticks, burnt rubber, or mothballs. Other sources of sulfur compounds include hydrogen sulfide as a by-product of fermentation by yeast via the sulfate reduction pathway1 if fermentation occurs in a nitrogen-poor environment.

Oxidation requires just two ingredients – oxygen and a catalyst. Oxygen can slowly enter the bottle through diffusion, while bacteria provide the enzymes required. If too little sulfur dioxide is used during the process, bacteria can thrive in wine and oxidize its components, especially ethanol in plentiful supply. This oxidation of ethanol is one of the most common wine faults, a process that is accelerated by higher temperatures.

Simple, yet not so simple oxidation that is catalyzed by ethanol dehydrogenase in bacteria or yeasts.

Premature oxidation of ethanol in wine leads to the formation of acetaldehyde (also implicated in hangovers), which is further oxidized to acetic acid (vinegar!) leaving you with a sour taste in your wine. (Read about ethanol dehydrogenase in humans?)
Of course, there are other chemicals in wine that are also readily oxidized: anthocyanins, catechins, epicatechins and phenols are among those those most easily oxidised, which can lead to a loss of colour, flavour and aroma – or ‘flattened’ wine. 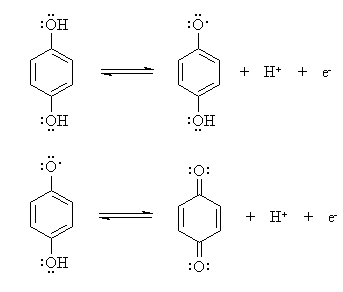 Two-step oxidation of the phenol hydroquinone to benzoquinone. Note the formation of the intermediate phenol radical!

Storage conditions such as temperature, humidity, exposure to light as well as the bottling of wines can contribute to the introduction of unwanted chemicals in what would have been a fine wine – we’ll look at the formation of some of them here! 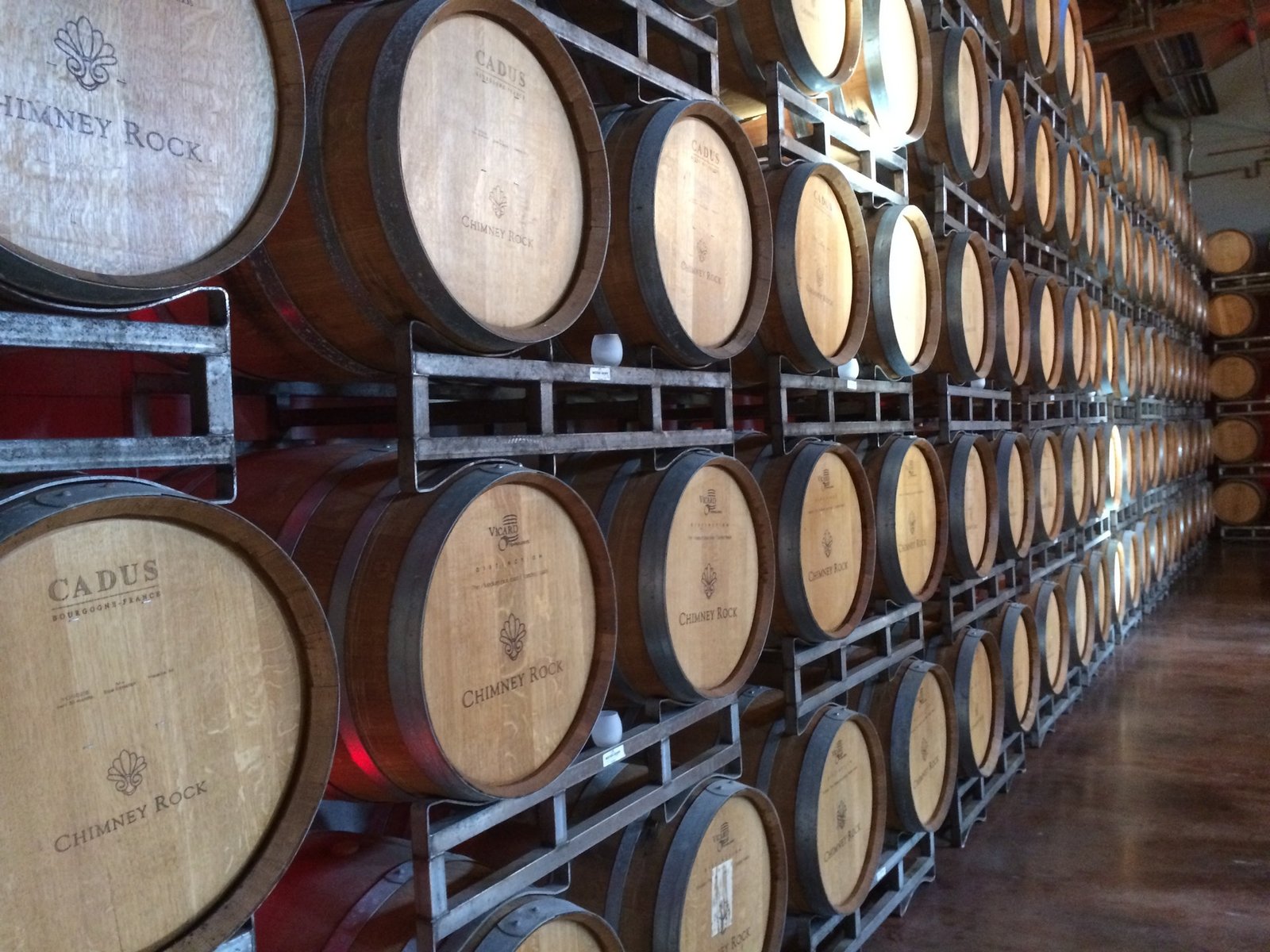 The corks that stopper the bottle is known to introduce 2,4,6-Trichloroanisole (TCA) into wine, which can be detected by taste receptors at very, very low levels. It works by suppressing the effects that nicer tasting compounds have on your receptors, replacing all of that good stuff with a moldy taste.

Wines that are stored at room temperature or higher will generally age at a faster rate, with more extreme temperatures causing thermal expansion of liquid and gas. If the cork is partially pushed out of the bottle, or wine is visible on the top of the cork while it is still in the bottle, it has most likely been heat damaged. Due to the widespread prevalence of heat damaged wine, many consumers mistakenly attribute the taste to poor quality.

Wines that are exposed to UV radiation (325-450 nm) apparently have a taste of wet cardboard, known to be ‘lightstruck’. Champagnes are the worst affected, with red wines largely protected due to the presence of UV absorbing phenols. 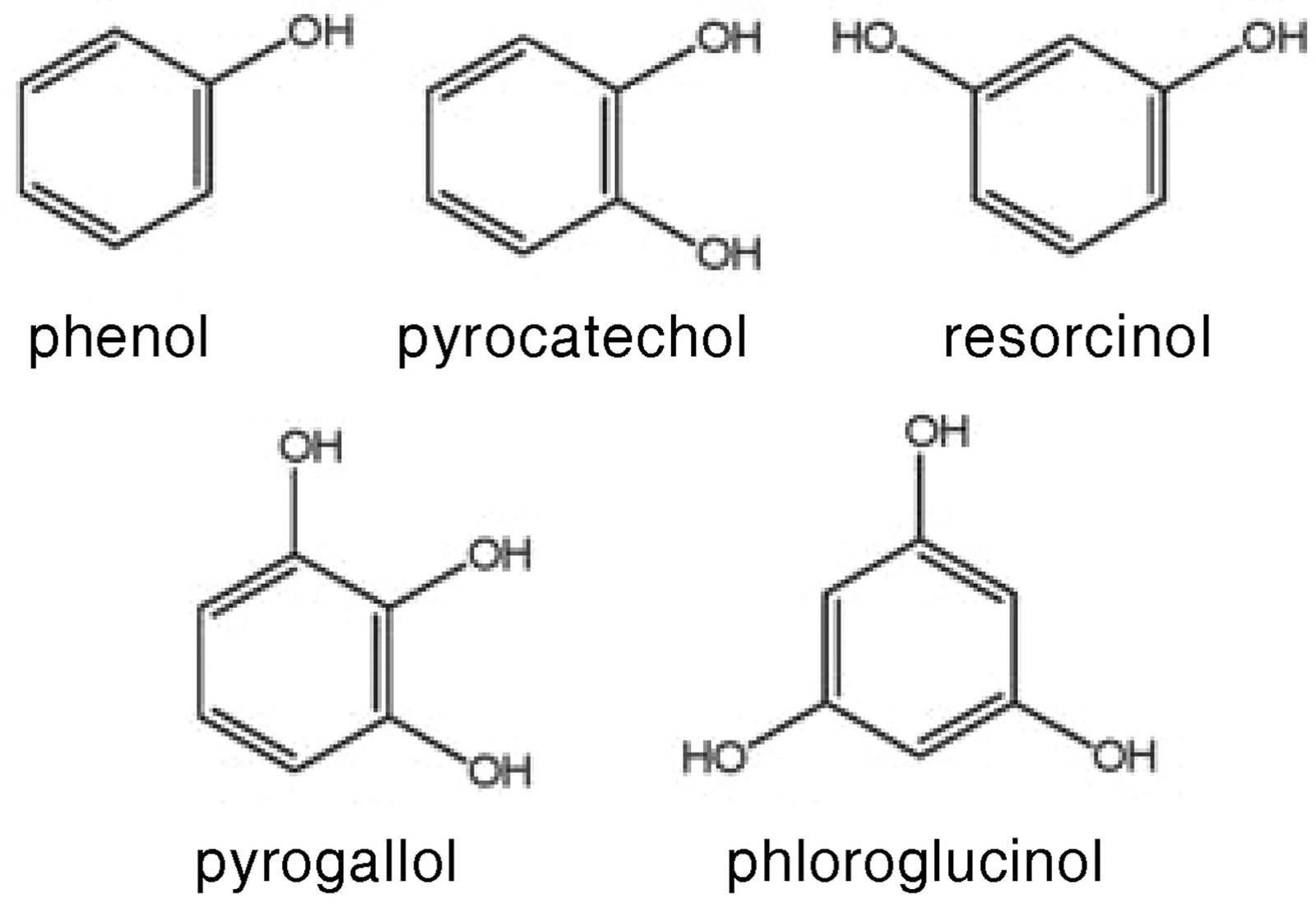 Here, have some phenolic compounds.3

I find it fascinating that a lot of what are known as ‘bad’ characteristics of spoiled wine are actually present in a ‘good’ wine, albeit in differing concentrations. Still, the minute  difference in concentrations (ppb-ppm) that we have discussed here are enough to affect our taste receptors such that are able to perceive them. Thank you for reading, and I’ll leave you all with a little infographic that shows just some of the compounds that are present in wine! 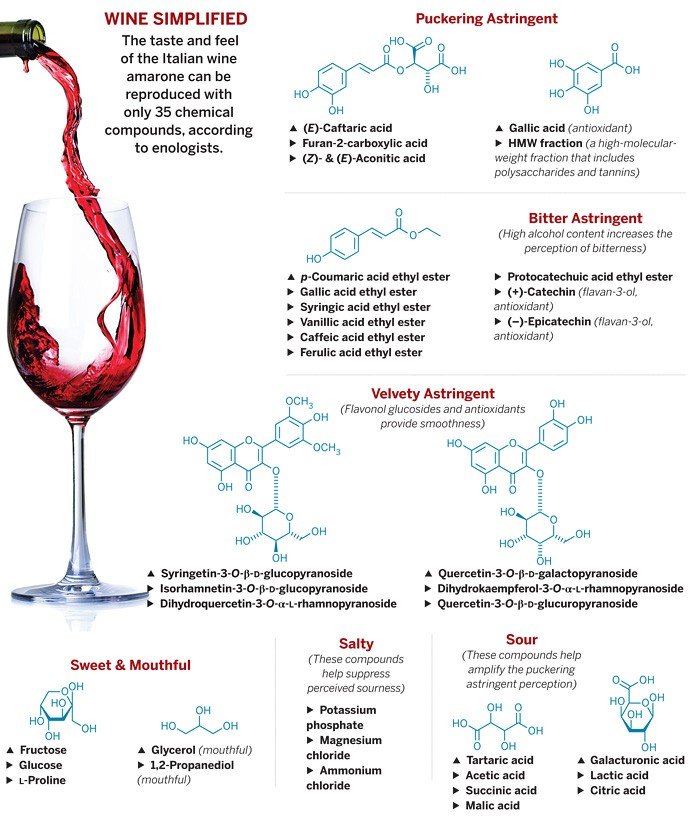