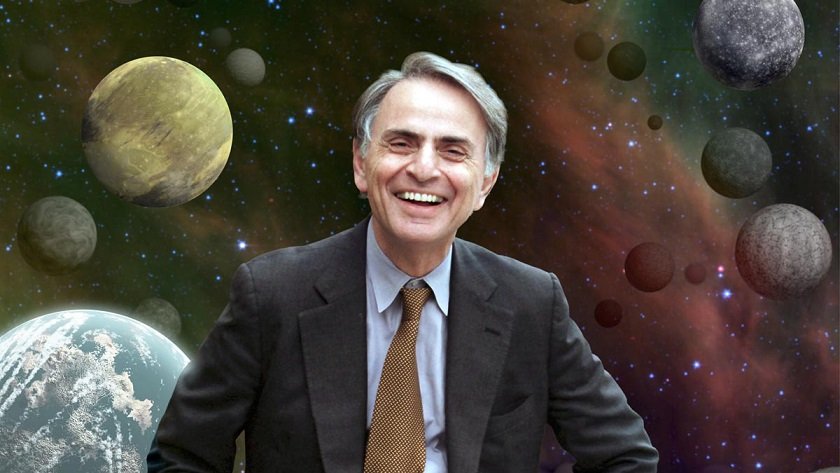 It is easy to forget that the extraordinary human being that is Carl Sagan hasn’t been with us for over 20 years now, passing away from pneumonia in 1996 at the age of just 62. It is easy to forget that, because – like the man himself – his legacy speaks with an unfaltering voice that threatens to inspire even the harshest of critics and the staunchest of oppositions.

How I Met Carl Sagan

Okay, so I have never actually ‘met’ Carl Sagan, or indeed ever watched him live; he had already passed for quite some time by the time I realized of his existence. It was around 2005 that a 13-year-old me walked into an auditorium expecting another science class, and instead was made to sit through an entire episode of the TV series Cosmos: A Personal Voyage, in which a man with funny eyebrows and a penchant for turtlenecks talked endlessly about space and evolution.

This happened 12 more times, once a week, until the entire Cosmos TV series came to an end.

Sounds like fun for a high school subject – the catch? A science report on each episode was to be submitted the following week. Needless to say, everyone enjoyed the actual class itself, and not so much the homework. We were curious kids, hungry for science and knowledge, and we quickly learned to appreciate the eloquence of Sagan’s speech. He did not have the most powerful voice, but when he used it to explain tough theories they suddenly made all the sense in the world.

Left to our own devices, re-explaining those concepts was a really tough ask for barely teenaged kids. Essentially, the class had become one of critical thinking, with Carl Sagan the unwitting teacher from beyond the grave (our actual class teacher barely said a word, preferring instead to sit and enjoy the show with us).

I suppose most people would have first come across Carl Sagan in this way, with Cosmos (both the series and the accompanying book) undoubtedly his magnum opus, to take nothing away from his already illustrious career up till that point. The show has been reportedly watched by half a billion people since its inception, such is its popularity, and even has its own channel on an endless loop.

Even before the filming of the show in 1978, Sagan was already a renowned figure in the world of popular science (‘pop-science’), featuring in public lectures and outreach events where he won audiences over with his gift for conveying concepts, ideas, and wonder. His 1977 book, The Dragons of Eden – that detailed the theories of the evolution of human intelligence – won a Pulitzer Prize the following year.

But more than just a great communicator of science, Carl Sagan was also well known for his contributions to astronomy and astrophysics. A full professor at Cornell University at the age of just 36, Sagan concurrently worked on the U.S. space program from the day it was established. He authored hundreds of publications in prestigious journals such as Science and Nature, and it is a testament to the quality of his research that today – 40 years since publication – they are still cited as heavily as ever.

In the eyes of the public, Sagan was a genius, a forward thinker capable of influencing policymakers with logical thinking and evidence-based science. He was a keen advocate for rational skepticism, arguing that a scientific background was not a necessity in order for an individual to ask the right questions, to be skeptical of those in authority.

Invariably, Sagan was a keen proponent of the dangers of pseudoscience and superstitions, citing their lack of empirical evidence. In the penultimate episode of Cosmos, Sagan states that ‘extraordinary claims require extraordinary evidence’ in a phrase that has come to be known as the Sagan Standard.

Above all, Carl Sagan was a bridge between science and the public, a science communicator. A humble man who recognized the importance of the work of those who had come before him, he had a special passion for space, evolution, and the future of humanity. And he was mightily successful in inspiring others to adopt the same kind of appreciation.

‘Science is not perfect, it’s often misused, it’s often a tool. But it’s the best tool we have.’ Carl Sagan

To live in the present, at a time in which science communication is not only accepted but embraced by the general public, but also accessible and affordable to the majority.

Many institutions now offer courses and even full-time positions, leveraging on the benefits that science communication can offer; it is clearly within their interests that their research is disseminated to the wider public. Furthermore, funding for science comes from taxpayers, most of which haven’t a clue as to where this money ends up. Unlike developmental projects, roadworks and charity events, science tends to be ‘the domain of scientists’.

By increasing the public’s approval of science funding, first by communicating its applications and benefits, society can become more engaged in scientific discussions, more open to critical thinking.

November 9th marks Carl Sagan Day – the day he was born – and I just wanted to mark the occasion this year with this piece. I would like to think that I share at least a few similar views on science and science communication with this great man.