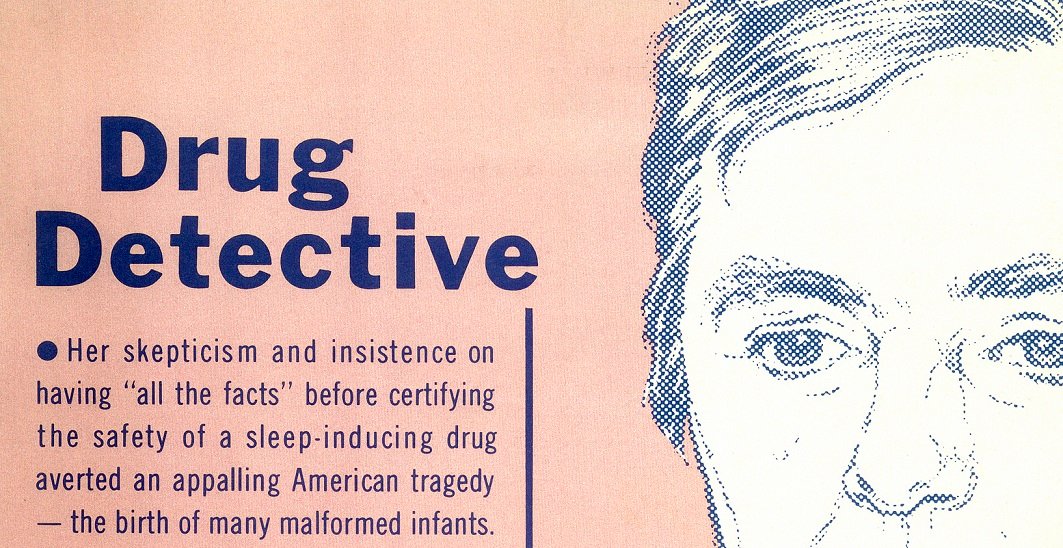 What is the role of regulation in drug development? It may seem like a big obstacle in the path to discovering and delivering novel medicines to patients, potentially delaying treatment and prolonging their discomfort. This is the true story of how Frances Kelsey dared to challenge the safety and efficacy of thalidomide, becoming a national heroine in the process.

Most of us would have heard of thalidomide, the sedative developed by Grünenthal and subsequently used as a treatment for morning sickness in pregnant women in the late 1950s. While thalidomide was marketed heavily in Europe, the drug was prevented from entering the U.S. by Food and Drug Administration (FDA) officer Dr. Frances Kelsey. Kelsey was a Canadian born pharmacologist, holding positions at the University of Chicago and the University of South Dakota. She left academia to join the FDA in 1960, and reviewing thalidomide was one of her first assignments.

It may be hard to believe that a drug with such marked teratogenic properties as thalidomide was once approved for over-the-counter use, especially popular in Europe and Africa. But the 1950s was a time of wonder and innovation as far as drug discovery was concerned. The recent widespread availability of penicillin and other novel medicines like erythromycin meant that many previously ‘incurable’ diseases were now curable, with an ever-increasing number of treatment options for patients available by the day.

In keeping with Hollywood, companies raced to release the next blockbuster; newer and ‘better’ variations of drugs popped up on the market, followed closely with intense advertising campaigns and extravagant claims. But Dr. Kelsey, faced with the might of a major pharmaceutical company eager to release their product into the U.S. market, remained unmoved. She asked for more information, more data, delaying approval of the drug based on her skepticism of the company’s claims.

Not long after, thalidomide was implicated in causing birth defects in babies whose mothers took the drug at a certain period in their pregnancy term. These babies were often born with malformed limbs and extra digits, among other complications. But it had taken 5 whole years for this link to be made and for thalidomide to be completely taken off the shelves worldwide. When news of this broke, there was a global outcry – how had whole governments and pharmaceutical companies let this happen?

In an era of medical ‘innovation’, there needed to be a set of guidelines governing the development of drugs. How do we know that the drugs we take actually have their intended purpose? Are we aware of any potential side effects/adverse reactions? It became the responsibility of the government to quickly enact laws to ensure the efficacy and safety of new drugs. Companies began to change their R&D programs to include better and more robust clinical trials. The drugs that became blockbusters were ones that were actually effective with minimal side effects, as opposed to the ones that had the most money spent on their marketing and advertising.

Almost immediately after Frances Kelsey averted the thalidomide tragedy, a set of laws was quickly passed, requiring companies to prove the efficacy and safety of drugs entering the U.S. markets. In addition, companies would be required by law to disclose any and all information about potential side effects that were discovered during clinical trials.

Prior to this, drug companies needed only to show that their product was safe. This milestone amendment changed the way drugs were approved and protected consumers from false claims and advertising. This set of laws were collectively known as Kefauver Harris Amendment or ‘Drug Efficacy Amendment’, brought into effect on October 10, 1962 by then-U.S. President John F. Kennedy.

Balance Between Regulation and Innovation

However, regulation doesn’t mean being close-minded about the drugs that are sent for review. It is extremely important for health authorities to promote innovation, paving the way for new and improved therapies for diseases. As a case in point, thalidomide was once again sent to the FDA in 1998 for review, resulting in its approval to treat complications arising from leprosy. This time, however, it was supported by solid data that showed that it was both safe and effective when used in the indicated manner.

Furthermore, the FDA has programs in place to ensure that patients who desperately need a yet-to-be-approved drug get the treatment they require as quickly as possible, without sacrificing safety and regulation. The four main programs are:

Kelsey’s role in averting a potential disaster involving thalidomide earned her heroine status, with then-President John F. Kennedy awarding her the highest honor that the Federal Government can grant a civilian employee. Apart from playing a key role in establishing the Kefauver Harris Amendment, she was made the director of a new division at the FDA, testing and investigation new drugs, Her story was used as a recruitment tool, to encourage others that they too could make a difference in the role of a ‘Drug Detective’.

She reminded the world that it was important to challenge authority, be skeptical of media claims, and to uncover the real science behind supposed therapies. Today, her mindset is as relevant as ever, with unscrupulous companies finding ways to market their pseudoscience as cures by exploiting loopholes in health authority regulations.

As an aside, Frances Kelsey retired in 2005 after 45 years of service to the FDA. She died in 2015 at the age of 101. Every year, the FDA dedicates the Kelsey award to an employee to ‘celebrate courage and scientific decision-making’.