Does Alcohol Really Kill Brain Cells? The Effects of Booze on The Body 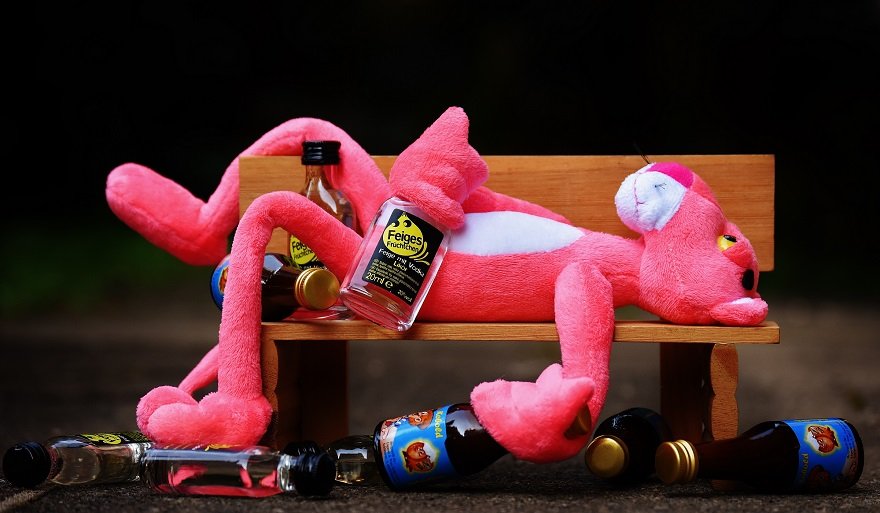 ‘In Vino Veritas’ or ‘in wine lies truth’ are well-known words supposedly uttered 2600 years ago by the poet Alcaeus of Mytilene. Since ancient civilizations, humans have been familiar with alcoholic beverages; its effects are documented as far back as biblical texts. Depending on the amount consumed, alcohol can cause blackouts, headaches, nausea or fatigue. But what actually happens to the glass (or glasses) of wine we consume after it enters the human body?

This might come along as a stupid question at first, but have you ever thought about what alcohol actually is? In daily life, the term is mostly used to describe alcohol we find in drinks – ethanol (or ethyl alcohol). But there are many other kinds of alcohols as well; in the chemical sense, alcohols are defined as hydrocarbons containing one or more hydroxyl (-OH) groups bonded to a saturated carbon.

A well-known example is methanol, just a methylene group (CH2) short of ethanol. But methanol exhibits different toxicity compared to ethanol and a small amount can be very harmful, even deadly. Another alcohol some might not recognize as such is glycerin (aka glycerol). Glycerin is used in different ways in industry: cosmetics (just look on your shower gel bottles or moisturizers), fuels, dyes, pesticides and even in the production of nitroglycerin1!

Related: Why is Methanol Toxic, But Not Ethanol?

Our ethanol though consists of 2 carbon atoms, 5 hydrogen atoms and 1 hydroxyl group – or C2H5OH; its name is derived from the ethane structure (C2H5) fused with the alcohol group (-OH). It is widely used in laboratories as a solvent or disinfectant, and also in our everyday lives as a beverage2. The first documented alcoholic beverage was produced 9000 years ago in China, a wine-like drink made from fermenting rice, honey and fruit. Nowadays count varieties of crops and other ingredients are fermented through biological processes (beer, wine, cider) or distilled (vodka, whiskey, rum) to create the perfect drink17.

Ethanol in our Body

The ethanol molecule itself is mostly harmless. Unfortunately, this doesn’t mean your body doesn’t react to it – but we all know that. As soon as ethanol reaches the liver, it is metabolized (chemically changed) by enzymes into acetaldehyde while also generating free radicals – think of these as a bunch of highly reactive stuff. Acetaldehyde in particular causes cell and tissue damage, inhibition of repair functions, blocking of protein secretion and can even trigger an immune response3. Another effect is that liver cells (hepatocytes) start to swell, thought to be a factor in the development of typical liver diseases like cirrhosis7.

Acetaldehyde is then further metabolized by the enzyme ALDH to an acetate salt that dissolves well in water. Acetate leaves the liver through the bloodstream where it can affect blood pH, the nervous system and other metabolic pathways before being excreted.

So our body has enzymes that deals with alcohol, great! But as can be seen from the diagram, oxygen is required for the metabolism of ethanol – oxygen that is also required for us to survive. Furthermore, the production of carbon dioxide increases its concentration in the blood 3. Have you ever noticed that your heartbeat increases after drinking? That is, in fact, one of the effects of hypoxia – oxygen deficiency in your cells4.

Another effect observed after consuming alcohol is the urge to use the toilet, due to its action as a diuretic (or urine producer). The kidney produces vasopressin, an antidiuretic hormone, which allows water to pass through the membranes of kidney cells and transporting it back into the body. Ethanol is able to inhibit the production of this hormone, preventing the reuptake of water and causes dehydration, leading to many of the symptoms associated with a ‘hangover’5. Apart from dehydration, electrolyte concentrations in the blood like sodium, potassium, phosphate, magnesium and calcium can also be disrupted, causing complications6.

Nausea, headache and fatigue are symptoms of a typical ‘hangover’.

The liver – contributing to 90% of ethanol metabolism – is also at risk of overuse. Metabolic products such as acetaldehyde and free radicals damage the liver cells and can trigger a local inflammation caused by cytokines (i.e. interleukins) from our own immune system. If triggered regularly, the individual is at higher risk for diseases like a fatty liver, cirrhosis and even liver cancer7.

Apart from affecting the individual consuming it, ethanol also has teratogenic properties – causing damage to the unborn child. A child’s brain is at high risk of oxidative damage caused by products of alcohol metabolism as the undeveloped organ has low levels of antioxidants. Additional reactions such as the breaking down of membrane components by alcohol-mediated enzymes can cause damage resulting in defects and decreased size of the fetal brain3.

A common symptom of alcohol consumption is a headache, ranging from mild to severe. This is linked to a low amount of free magnesium and calcium ions in the brain which impacts enzymes, neurotransmitters and other functions8,9. Alcohol also serves as a trigger for migraine attacks in patients susceptible to them10. But does alcohol actually damage the brain irreversibly?

Some believe that alcohol consumption may permanently destroy cells in the brain, but is that really the case?

According to a study looking at various IQ and memory scores meant to quantify brain function, individuals who consumed alcohol more than 3 times a week scored lower in the test (90-100) compared to the control group (around 110)11.

Furthermore, a loss of brain mass can be observed in alcoholics, especially in the amount of ‘white matter’ that connects regions of the brain with each other. Studies on rats have shown that excessive intake of alcohol causes a reduction in nerve fibers and myelin (the insulative substance surrounding white matter); this is associated with neurological disorders and cognitive decline12. The matter of whether the brain is able to repair these regions after an extended period of alcohol abstinence is still uncertain. So while alcohol use may or may not ‘kill’ brain cells, it surely does have a negative impact on how well your brain works!

A more acute problem that may occur right after an individual consumes a large amount of alcohol is a ‘blackout’. Due to the severity of intoxication, the brain is unable to cope with the chemical imbalance and its storage processes are temporarily halted. This means that it can’t save the memories created around this time – sort of like forgetting to save a file before the computer crashes13.

Alcohol and The Mind

Another potentially dangerous effect of alcohol consumption is its impact on cognitive control. After one or two drinks people tend to get more talkative, honest and daring. Alcohol affects inhibitory control which lowers behavioral thresholds that can result in an individual carrying out unusual actions, feeling good in the process. This loss of control leads to craving even more alcohol, explaining why some people binge drink to the point of severe intoxication.

This inhibition seems to be linked with aggressive behavior; alcoholics are up to two times more likely to engage in violent behavior than moderate drinkers14. Scientists have found that alcohol stimulates serotonin and dopamine release, which is associated with ‘social stress’. By impairing the prefrontal cortex and amygdala – parts of the brain responsible for emotional responses – alcohol can lead to aggressive and violent behavior15.

Around 50% of all violent crimes and sexual assaults involve prior consumption of alcohol.

Of course, some of us just like a drink or two when we’re chilling with friends or at social events, and others go so far to claim that moderate alcohol consumption is actually beneficial to health.

However, this claim is yet to be substantiated. And it might be a long shot seeing as alcohol consumption is strongly linked with type 2 diabetes, heart disease, stroke, liver disease, brain damage and even mental illness16.

In today’s society, there is a constant social pressure to ‘just have a drink’. Many people simply accept a drink in order to avoid coming across as boring or antisocial, although they don’t actually want to. Many social environments revolve around drinking, with questions being asked if there isn’t alcohol around, to the point where people even get called out for not drinking.

If everybody is doing it, it can’t be that bad – right?

Everyone should be able to decide whether or not to drink, free of pressure; it is important to raise awareness of the dangers of alcohol use and misuse so that people are aware of the risks involved. More importantly, with this knowledge in hand, everyone can contribute by not pressuring others when they refuse ‘just one more drink’.

NOTE
If yourself or somebody you care about is affected by alcohol abuse, there is help available to get you through it. Nobody should feel ashamed or alone. If you feel like this could be an issue in your life, here are just several of many organizations that you can reach out to: