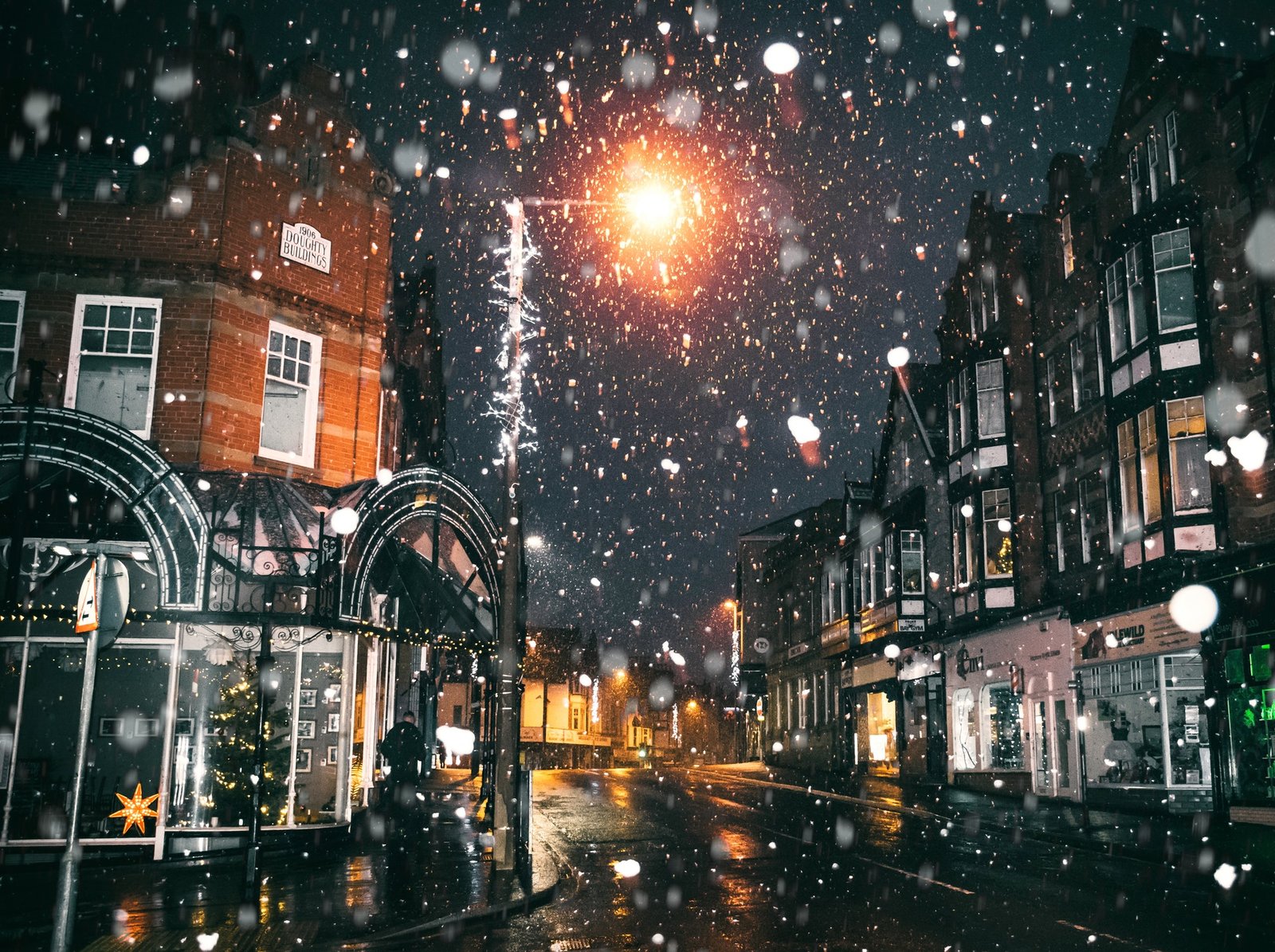 Merry Christmas! As we relax and unwind this holiday season, look out the window and observe the falling of snowflakes (if you’re fortunate enough to be able to!). Each icy crystal begins its existence high up in the atmosphere and slowly alters its appearance as it falls but always retaining its hexagonal structure, nature ever the master craftsman…

The birth of each snowflake can be attributed to a nucleation event: a particle such as a speck of dust comes into contact with cold water vapour in the atmosphere and allows water molecules to freeze on its surface. The snowflake can now begin its growth in earnest.

As they get heavier the bonded molecules make their way down, maintaining an equilibrium between the rate of water molecules diffusing toward the ever growing flake and the rate of crystal formation at its interface. A higher rate of water diffusion drives the system toward irregular growth, maximizing its surface area. A higher rate of crystal formation competes by cultivating the growth of longer patterns and overall symmetry. It is impossible to predict the exact geometry a snowflake will adopt due to the microenvironments each is exposed to, but the table below does a decent job of it1:

The minuscule differences in the environment and conditions that each individual snowflakes experience as they fall give each a unique pattern, from needles and laces to the most complicated and wonderfully crafted prisms and plates. The chances of finding two identical snowflakes in nature are near impossible!

Many people would have learnt, or realized that each and every snowflake – no matter the shape or size – without fail, has six regular sides. This phenomenon was first explained by the mathematician Johannes Kepler in 1611, in which he stated that the answer lay not in the material’s characteristics, for vapour is formless, but in an agent. He proposed that this ‘agent’ worked through more mechanical means, the smallest natural unit of water used as a template to align and stack following units. In other words, the solution came from looking at the water molecule itself.

Kepler, with the help of fellow mathematician Thomas Harriot – who had a thing for packing cannonballs in close quarters – asserted that hexagonal packing would be the tightest and most efficient, such that in no other arrangement could more pellets be stuffed into the same container. This assertion about maximal close-packing is known as Kepler’s conjecture, and also gave rise to a whole area of study of crystal and lattice chemistry which we have all come to know and love.

In case you forgot your 2nd year chemistry class: The front snowball pyramid is hexagonal close-packed and the rear is face-centered cubic!

In actual fact, the mere shape of a water molecule does not ‘force’ a lattice into adopting a hexagonal close packed structure; other structures are readily possible but the conditions that water freezes in our atmosphere favors the adoption of ‘hexagonal ice’ rather than ‘cubic ice’ or ‘trigonal ice’.

From the diagrams above, it is easy to picture how the hydrogen atoms in each water molecule interact with the two lone pairs on the oxygen. Each water molecule in ice is forced into adopting an almost tetragonal wider opening angle (106.6° rather than the 104.5° observed in ‘free’ water) such that one connecting point is facing either directly on top or below the trigonal plane. This allows for the connection of open, hexagonal rings that make ice less dense than water as well as explaining the geometry of a snowflake!

But why then, if given the opportunity to expand in all directions, do snowflakes grow so thin? Why do the corners grow many thousand times faster than the top and bottom faces? Apparently this is a phenomenon that only occurs in the narrow temperature range that is our atmosphere, in other conditions ice tends to form larger and bulkier prisms. As to why, well, that’s something that a hundred years later, is still the subject of research…

Thank you once again for taking the time to read this, we hope you enjoy it and we would also like to take this opportunity to wish all our readers a very merry festive period, enjoy your holidays wherever you may be!