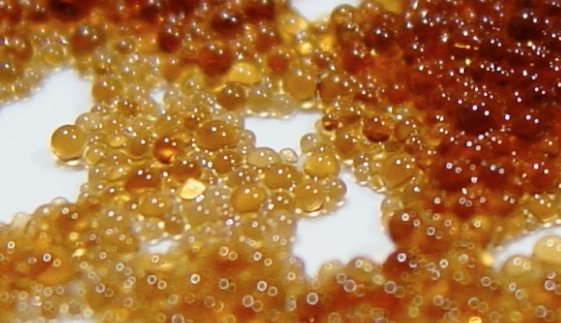 A simple yet extremely versatile tool, ion exchange systems are used to separate specific ions across a wide range of processes: synthesis, research, mining, even agriculture. Whether you’re a biochemist who needs some precious protein purified or an engineer looking to recycle uranium from nuclear waste, having a basic knowledge of ion exchange at the chemical level is advantageous.

What is Ion Exchange?

Ion exchange is the process of removing ions from a liquid and replacing it with another, hence an exchange. This is achieved by a solid material that is able to bind ions effectively in a reversible manner, such that the initial solid remains unaffected and can be regenerated. By doing so the material reused through many cycles of exchange and subsequent regeneration.

An example of ion exchange in action is in the process of water treatment, where ‘hard’ ions such as calcium (Ca2+) and magnesium (Mg2+) ions dissolved in water are removed – as they precipitate soap into scummy lumps instead of allowing it to spread out and foam nicely.

The exchange occurs on a material known as the resin, that is saturated with a different ion than the one it is removing. Usually, sodium (Na+) or protons (H+) are the ions of choice in water treatment; the equation for exchange is:

The process has to be reversible; the resin is regenerated back to its sodium-bound form by ‘washing’ it with a saturated sodium chloride solution and displacing the bound calcium ions. In this manner, the resin can be used through many cycles of operation.

Ion exchange has been in use since around 1910 when naturally occurring zeolites – minerals with a microporous structure that could accommodate ions – were first introduced as water softening materials. Synthetic zeolites are still used today as molecular sieves, due to their higher efficiency compared to desiccants (such as magnesium sulfate).

The first resin developed for water treatment on an industrial scale was sulfonated coal, which is stable and functional even in an acidic environment.

Synthetic resins only started to appear in the 1930s, when people started to exploit the utility of ion exchange. Sulfone (for cations) and amine (for anions) functional groups were directly bound to a cross-linked polymer backbone by using condensation reactions (show phenolic condensation reaction). These crude early resins were effective in picking up large and highly charged ions but suffered in terms of selectivity toward smaller ions like H+ and OH–.

Interestingly, the soil is a well-studied natural cation-exchanger, able to sequester (trap) positively charged ions. Soil comprises of organic matter as well as clay minerals that possess negative charges, allowing it to retain required plant nutrients (e.g. K+, NH4+, Ca2+). However, this also means potential toxic pollutant cations like mercury and lead (Hg2+, Pb2+) can also be present in the soil, bioaccumulating in plants and up the food chain.

Fast forward to the present day and we find a huge variety of functional groups that have been synthetically added to these polymer backbones, each designed for a specific purpose. Obviously, the active ion is a key part of any resin, influencing the selectivity for certain anions/cations and the stability of the resin material in general.

Since ion exchange is a reversible process, bring a cationic resin in contact with a saturated solution of anions would invariably bring about a total conversion of the resin. However, in real-world applications, there is normally a lower concentration of ions to exchange. The selectivity of a resin is measured relative to their affinity to H+ for cations and OH– for anions, that are assigned a value of 1.

The stability of a resin determines its useful life and can have a large economic impact. Strong oxidizing agents such as nitric acid are usually kept away from resins, but weaker ones such as oxygen and chlorine can degrade the material at a slower pace. The polymer backbone is also susceptible to attack, but this can be mitigated by increasing the amount of cross-linking, strengthening the material.

Apart from the material, other important parameters to consider when designing an ion exchanger are its porosity and particle size. These are modified to increase the selectivity of the material for a specific ion, or increase the overall stability of the resin; these can be controlled during the manufacturing process. The shape of each bead or sphere can also be maintained at uniform particle size. Other properties like the capacity of the resin are dependent on the type of backbone used and the number of sites of exchange.

Now that we have the fundamentals nailed down, let’s take a look at some real-world applications for ion exchange resins, and how you can apply this technology to your process or experiment:

As mentioned earlier, water ‘softening’ is of great importance to industry, and indeed the bulk of resins are manufactured for this purpose. Dealkalization is another process that water may be subjected to, with the help of weak acid (hydrogen form) cation resins. These are able to remove dissolved ions contributing to alkalinity (carbonate, bicarbonate, sulfate, etc.) while minimizing the amount of free acid released into the system.

Sometimes both cations and anions are required to be removed from water; this calls for a two-step process. The water is first passed through a strong acid cation exchange resin that replaces any cations with H+, followed up with another wash through an anion exchange resin, replacing the anions in solution with OH–. The two resins can also be mixed and water passed through for simultaneous cation and anion exchange; either way, the products (H+ and OH–) combine resulting in purified water.

But it isn’t just water that can be purified, in fact, ion exchange is used to remove all sorts of contaminants – from acids/alkalis to organic/inorganic matter and even metals! As mentioned earlier, uranium can be selectively isolated from sulfuric acid baths using strong base anion resins; the same principle can be applied to recover other precious metals.

Many scientists out there would be more familiar in ion exchange as a form of chromatographic separation, which is especially useful as a tool to separate/purify proteins and nucleic acids. Proteins can be ‘charged’ by way of their amino acid group side chains, namely aspartate, cysteine, glutamate and tyrosine (acidic) and arginine, histidine and lysine (basic). By manipulating the pH using a suitable buffer, it is possible to protonate/deprotonate these groups such that their elution time is dependent on how strongly the protein is bound to the resin.